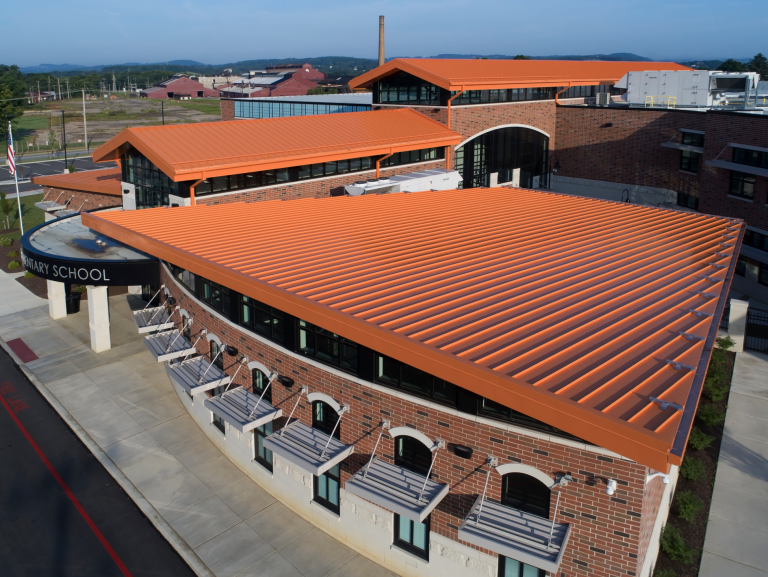 Located outside of Pittsburgh in Latrobe, Pennsylvania, the school is within easy driving distance of several popular ski areas, and the building’s design, by Monroeville, Pennsylvania-based Axis Architecture, has a bit of a Swiss chalet in its roofline.

More than 18,000 square feet of Petersen’s Tite-Loc Plus roof panels in a distinct, custom Marquis Orange finish help emphasize the angled gables topping the new school. The 22-gauge panels, along with 3,800 square feet of .032 gauge PAC-750 soffit, complement the classic terra cotta-toned brick that clads the upper two-thirds of the school’s façade.

The roof also features low-slope sections where a hot asphalt roof system from The Garland Company was installed.

The new construction project was appealing to the company for several reasons, including the size and the scopes of work that included metal and hot built-up roofing. 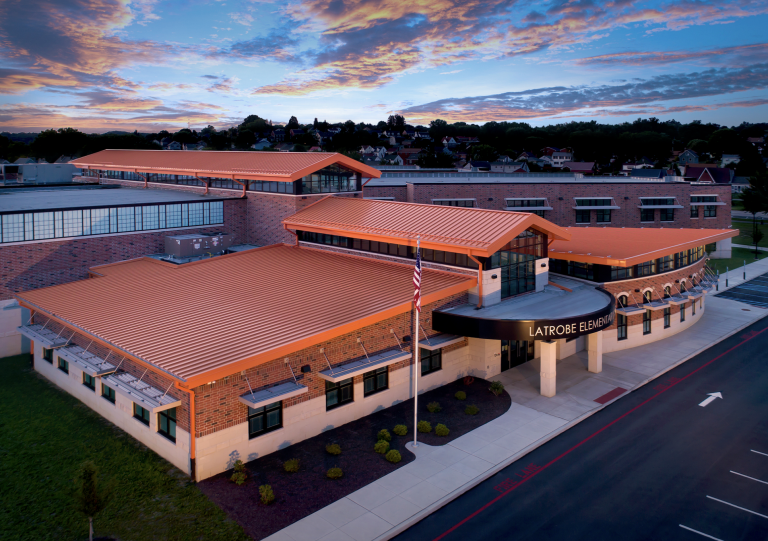 Two different crews tackled the metal roofs and flat roofs as the sections were being built by the general contractor, The Foreman Group.

On the low-slope sections, one crew installed the Garland hot asphalt roof system, consisting of insulation, base plies, and Garland’s modified cap sheet. Another crew tackled the metal roof, installing 16-inch-wide PAC-CLAD Tite-Loc Plus panels, which were mechanically seamed.

Pennsylvania Roofing Systems faced quite a challenge on this project as the acoustical deck for approximately half the building was running in the wrong direction. This posed a problem, as attaching the clips for the metal panels would perforate the acoustical deck. PRS came up with a solution to the problem. The company fabricated a 16-gauge hat channel that was installed over the acoustical decking, and the clips were fastened to it.

The roof panels were rolled on the site. PRS used its own Series 1100 National Crane and a Skytrak to lift material to the roof. Crews also installed 3,800 square feet of .032 gauge PAC-750 soffit. 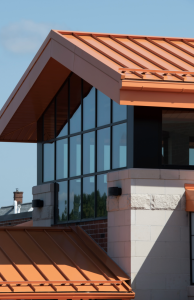 School administrators were concerned about mounting snow on the new metal roof and the safety of schoolchildren down below, so material supplier Brock Associates suggested installing ColorGard snow retention by S-5! The S-5! system is exclusively recommended by both Petersen, the roof manufacturer, and Brock Associates, the panel supplier.

PRS installed the snow retention system on 10 sections of the metal roof. The non-penetrating system was easy to install and perfectly matches the roof color. After the panels are mechanically seamed, the non-penetrating S-5-V Clamps are installed. The ColorGard system features a continuous extruded aluminum crossmember, and strips of prepainted metal are slid into the face of ColorGard to match the roof.

The complicated project went smoothly, according to PRS, thanks in part to excellent coordination between the general contractor and various trades. PRS management noted the company selected Petersen’s PAC-CLAD products because of the manufacturer’s excellent local representation, including distributor Brock Associates. Petersen’s reputation for good field support also played a role in this selection.